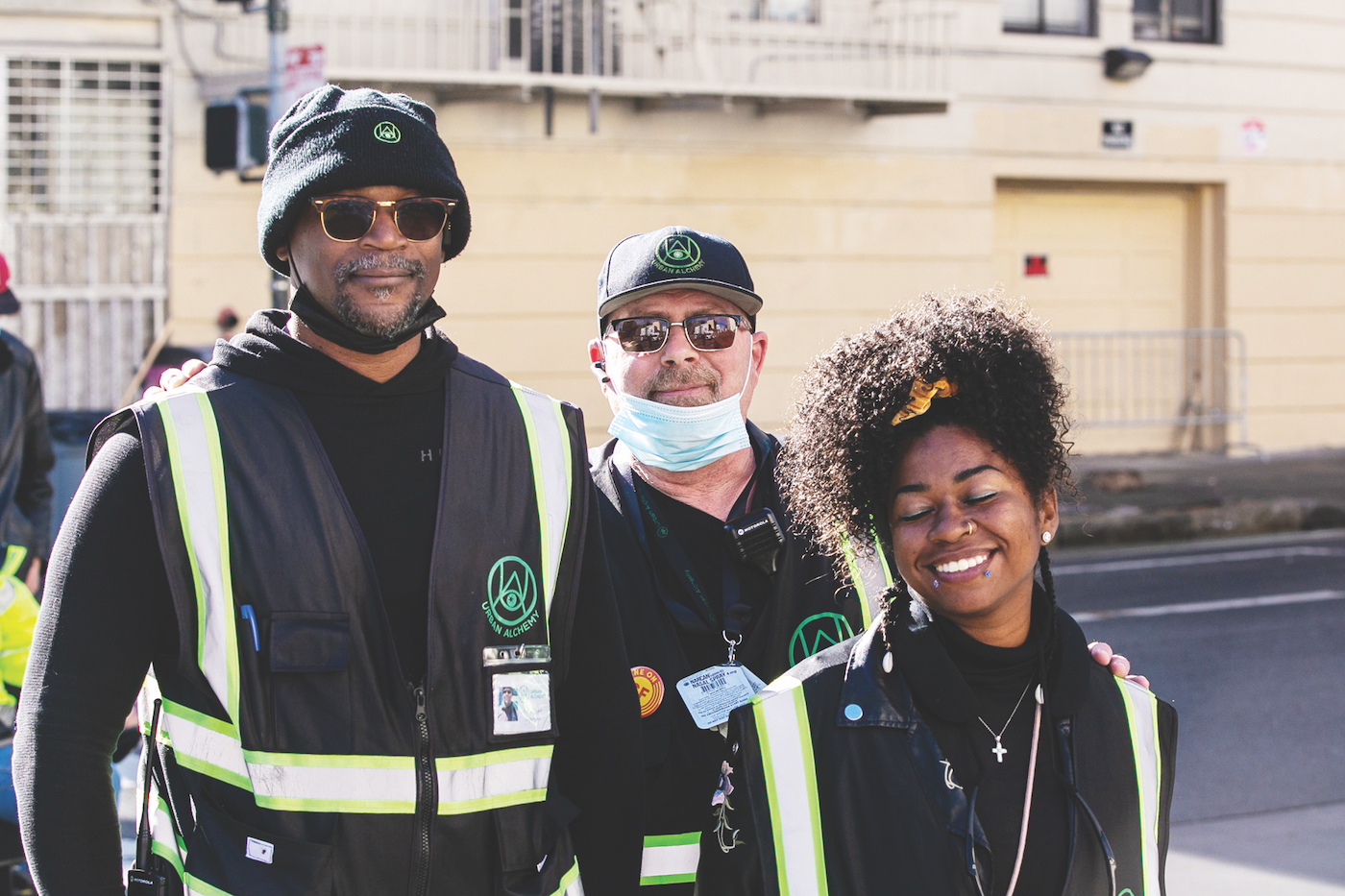 Ian, a former prison inmate paroled on the streets of San Francisco, knows how to do a tough day’s work. He helps others.

Armed with a nasal spray that halts opioid overdoses, Ian looks out for unhoused residents in trouble. Who may be hurting. Strung out. Who need a place to sleep.

The most rewarding part of his job?

Urban Alchemy is a nonprofit agency that hires people who were once incarcerated to provide street cleaning, mobile hygiene services, community engagement and outreach, and temporary shelter. Their work uplifts the entire community by providing these critical services with respect, compassion, and love.

Since it was founded in San Francisco in 2018, the fast-growing nonprofit has helped transform men and women who’d done time behind bars for decades into community treasures. And they provide good paying jobs and a career path in four cities in Northern and Southern California, and Texas.

From parolees to Practitioners, the non-profit’s more than 1,300 employees have engaged unhoused residents, promoted positive behavior, and connected people to local services.

They’ve removed tons of garbage from the streets, restoring pride to neighborhoods. They’ve set up and overseen bathrooms and showers, restoring dignity to those in need.

In the past year alone, Urban Alchemy Practitioners have saved the lives of more than 700 people through overdose reversals. In San Francisco, they helped locate safe camping areas and tiny home villages for unhoused residents to replace blocks of lawless sidewalk encampments. Due in part to these efforts, San Francisco saw a 15% reduction in unsheltered homelessness.

“We are working to transform neighborhoods that have been ignored for decades,” says Lena Miller, Chief Executive Officer. “Urban Alchemy helped reduce the number of tents in the Tenderloin from 500 to under 50. Our secret sauce is developing relationships with people who are struggling, with empathy and respect and love.”

When Ian got out of prison, he was paroled to the Tenderloin neighborhood of San Francisco, where he found himself on the edge of homelessness.

Then he heard about Urban Alchemy, which sought long-term offenders like him with the hard-won skills to navigate the streets – to build, rather than to destroy communities. Before long, he was working to keep the area around Civic Center and United Nations Plaza clean and safe. He realized the essence of his job was community service – a parolee keen to improve the public good.

“Who better than us to do this work?” asks Ian, now a Contract Manager for Urban Alchemy. “We’ve been in dark and ugly places like prison. I’ve been down and out. I’ve been homeless.

“I took so much from the world, so I have a strong desire to give back. We have to harness dignity and understanding because we’re talking about people’s lives here.”

We aim to raise the vibrations in urban spaces – and save the lives of those who exist on their streets.

After having spent most of my life incarcerated, I am so grateful for the opportunities that Urban Alchemy has given me. I have been allowed to grow and advance. I have been able to truly give back for the first time in my life. I cannot think of another company that would have done this.

Urban Alchemy is seeking support for its campaign to hire more people who have been incarcerated to help unhoused residents and keep neighborhoods safe and clean. For formerly incarcerated people with people skills, emotional intelligence, and empathy, Urban Alchemy provides a living wage and excellent benefits.

“Your support will help Urban Alchemy develop more jobs, uplift more neighborhoods, and provide complementary strategies to policing,’’ says Bayron Wilson, co-founder and Chief Operating Officer, who was once incarcerated. “It’s a revolutionary and simple idea, but nobody thought of it before. Urban Alchemy has turned the whole notion of incarceration on its head.”

In the midst of an unrelenting homelessness crisis, Urban Alchemy is forging a hopeful path. You can join them.