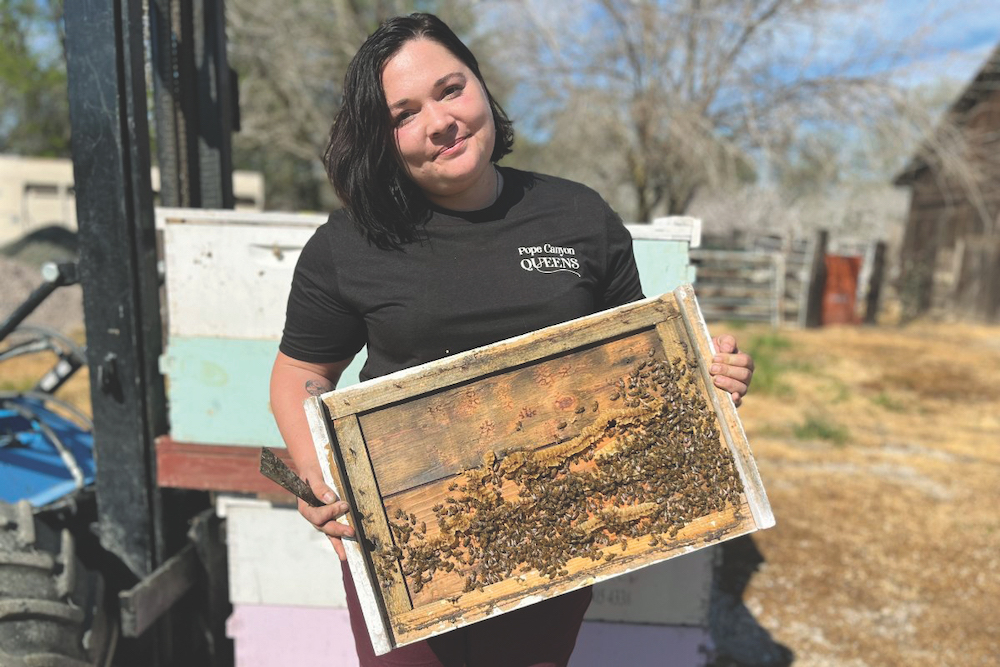 Civil Eats TV: Let Them Bee ‘To save ourselves, we have to save the bees:’ Caroline Yelle is breeding queen honey bees to survive the changing climate and multiple other threats.

Doria Robinson grew up in a tough neighborhood in Richmond, California. Liquor stores and fast food restaurants lined almost every block and healthy, affordable grocery stores were nonexistent. Robinson longed to bring affordable fresh vegetables and fruit to her low-income, struggling neighbors. She realized the answer was literally under her feet – urban farming.

“Nature is everywhere,” Robinson says. “Sometimes we just have to break up the concrete.”

Which is exactly what she did. Robinson’s journey to turn a vacant, garbage-strewn patch of land into a vibrant urban farm filled with kale, cabbage, collard greens, and tomatoes was featured on Civil Eats TV, a character-driven documentary series on women transforming the food system, produced in partnership with Mizzica Films.

The documentary series, cinematically shot using iPhones and drones, is the latest addition to the hard-hitting nonprofit newsroom Civil Eats’ mission to pull back the curtain on the country’s complex food industry.

Since 2009, Civil Eats’ solutions-oriented reporting has delivered a clear and compelling voice to complicated and often underreported stories on climate change, the environment, and social justice – all through the lens of food.

Launched at the height of the pandemic, Civil Eats TV showcases a myriad of inspiring women who’ve dedicated much of their lives to producing sustainable, just, and accessible food for all.

Episodes have explored racial and gender equity, sustainability, and Indigenous culture; from visiting a 1,000-acre pasture where one woman’s humane approach to shearing sheep is disrupting the male-dominated industry, to a woman beekeeper’s efforts to breed climate-resilient queen bees after losing everything in a wildfire. The series has received numerous accolades, award nominations, and inclusion at an international film festival.

“Women really are the backbone of the food system, and yet their stories are so underreported,” says Founder and Editor-in-Chief Naomi Starkman.

Robinson’s story of taking on food apartheid and creating a beautiful urban farm with a viable business model to bring fresh food to her community – including a free produce stand and food boxes for those in need – is remarkable and needed to be told, Starkman says.

After the episode was posted, Robinson raised enough money to finally purchase the lot. In recognition of her long-standing food equity work, Governor Gavin Newsom also recently appointed Robinson to the State Board of Food & Agriculture.

“It’s an honor to tell these stories of amazing women impacting our food system,” Starkman says. “Because food reporting is not just about recipes and restaurants; it’s about showing the ways that good food is a right, and not just a privilege.”

Civil Eats is a daily news source for critical thought about the American food system. We publish stories that shift the conversation around sustainable agriculture in an effort to build economically and socially just communities.

I hope you will join me in supporting Civil Eats, the best online food politics magazine. If you’re interested in changing our food system, it’s one of the most important things you can do.

Donate to the Trusted Source for Food Justice News

Civil Eats is seeking $100,000 to expand the important work of Civil Eats TV. Without philanthropic support, stories like Doria Robinson’s – and the many women working in the field – simply wouldn’t be told. Help Civil Eats TV put women in food in the spotlight, where they deserve to be.

“We believe the power of storytelling can change people’s hearts and minds and can truly make a difference,” says Civil Eats’ Naomi Starkman.