Building a World Beyond Incarceration for Bay Area Youth 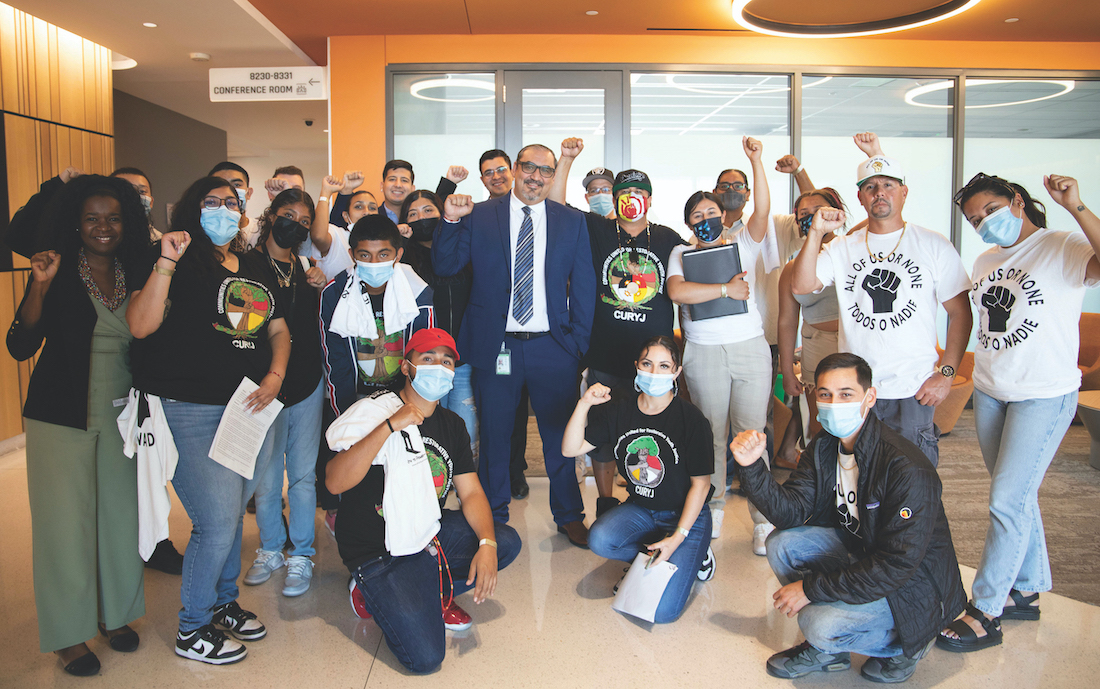 CURYJ youth, pictured here with 56th District Assemblymember Eduardo Garcia, participated in the 2022 Quest for Democracy at the California State Capitol. They met with legislators to advocate for AB503 (End Endless Probation), which would limit excessive probation terms for youth.

Alex Diaz, 26, first encountered the youth organizing and community building nonprofit Communities United for Restorative Youth Justice (CURYJ, pronounced “courage”) when he was 17. Diaz was staring down what would have been effectively a life-destroying 15-year prison sentence in Alameda County adult court.

CURYJ arranged for legal assistance and provided stabilization support for Diaz while he fought his case. That support saved his life. Diaz’s sentence was drastically reduced and he was released at 21, rather than having to survive as a kid in an adult prison.

Upon release, Diaz embraced his second chance and enrolled in Berkeley Community College. He earned a 3.92 GPA and transferred to U.C. Berkeley where he graduated last May with a bachelor’s in business administration. Next on Diaz’s radar: joining CURYJ staff as a Dream Beyond Bars Program Coordinator while he prepares for law school.

“That’s what happens when we invest in young people,” says CURYJ Executive Director George Galvis, who co-founded CURYJ in 2011 with the aim of ending youth incarceration and empowering youth impacted by the foster care and juvenile justice systems to become community leaders and advocates through paid internships and culturally-rooted political education.

To Galvis, Diaz’s triumphant story – while impressive – isn’t exceptional, he says. With the right support and resources, any young person can transform their lives for the better.

“Unfortunately, a lot of young people are not getting their needs met and in many cases that has been a trigger for their incarceration,” Galvis says.

In the Bay Area, where rents are astronomical, CURYJ is doubling its efforts to provide safe and stable housing for transitional age youth, which is essential for maintaining security in adulthood, he says.

Last year, CURYJ was awarded a 99-year lease – effective ownership – of the commercial space in an affordable housing development across from the Fruitvale BART station where Oscar Grant was killed by BART police on New Year’s Day in 2009. The high-profile incident was the subject of the movie Fruitvale Station. The 7,000-square-foot space, called the Oscar Grant Youth Power Zone, will house CURYJ’s programs, offering young adults a safe space to rebuild their lives and an opportunity to become community changemakers.

HOW YOU CAN HELP!

CURYJ has launched a capital campaign to raise $10 million over the next three years to build out the Oscar Grant Youth Empowerment Zone. So far, the organization has raised roughly $1.2 million.
It is looking for supporters to donate to funding building costs, scaling up operations, expanding staff, and having a stronger cash reserve. Investing in the Oscar Grant Youth Empowerment Zone presents a unique opportunity to work in solidarity with local communities and state organizations in order to ensure that the cultural heritage, activism, and diversity of Fruitvale are protected and preserved.
“CURYJ works on the issues that its members identify as important in their lives and centers the young people as activist change-makers. I support CURYJ because I see that this approach is the only way to make true change and grow community power,” says Quinn Delaney, a CURYJ supporter.
Thanks to Delaney’s generosity, all gifts will be matched up to $85,000.

CURYJ was born when our co-founders set out to defeat the Fruitvale gang injunction, a pre-emptive “restraining order” that gave cops the right to harass young people of color and strip them of their civil liberties. In the years since defeating the injunction, CURYJ has worked nonstop in coalitions and partnerships to fight against policies that criminalize youth and to craft policy that invests in our communities.

I support CURYJ because I believe that young people should have the power right now to shape the communities they will spend their futures in. CURYJ develops young leaders who are both idealistic and realistic, guiding them to develop critical self-awareness and self-knowledge. They turn that knowledge into power for their communities day in and day out.

The Oscar Grant Youth Power Zone will be the home base for CURYJ’s programs – life coaching, community healing, and its flagship leadership development programs Homies 4 Justice and Dream Beyond Bars, which provide paid fellowships for systems-impacted youth to work toward building life-affirming alternatives to incarceration and policing.

Slated to open in 2024, CURYJ believes the Oscar Grant Youth Power Zone will be more than just a resource center and community hub, but a symbol of hope, healing, and resilience for young people who want a better life.

“The Oscar Grant Youth Power Zone will be an example of what an alternative to incarceration looks like in Alameda County,” says George Galvis, CURYJ’s executive director and founder.

To build out the new space and maintain the construction timeline, CURYJ is raising $500,000 this year, with a matching pledge from their capital campaign committee chair, Sam Jacobs, of up to $200,000.