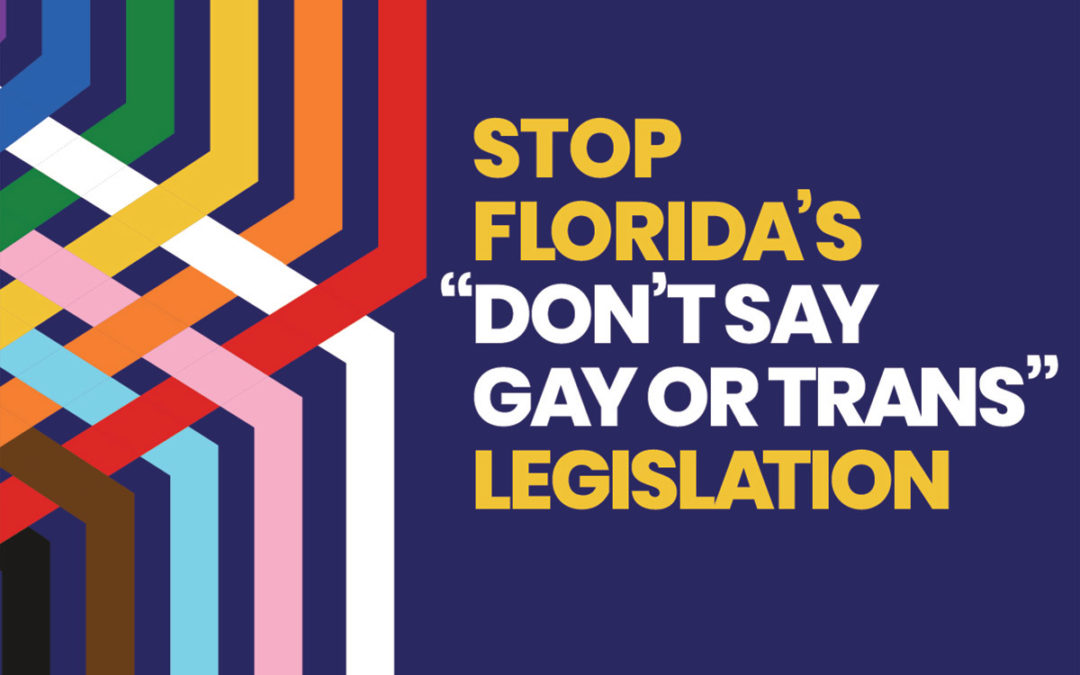 On March 31, 2022, lawyers from Kaplan Hecker & Fink LLP and the National Center for Lesbian Rights (NCLR) filed a federal complaint in the United States District Court for the Northern District of Florida challenging Florida House Bill 1557 (widely known as the “Don’t Say Gay” law). The lawsuit was filed on behalf of Equality Florida and Family Equality, as well as students, parents, and a teacher. The diverse group of plaintiffs come from throughout Florida. They face, and have already suffered, concrete harms as a result of this blatantly unconstitutional law.

As alleged in the complaint, HB 1557 would seek to erase for an entire generation of Florida public school students the fact that LGBTQ people exist and have equal dignity. HB 1557 harms LGBTQ people—and violates the First and Fourteenth Amendments of the Constitution—by discriminatorily censoring classroom instruction about sexual orientation or gender identity in Florida public schools, not only for grades K-3 but for any grade as long as someone concludes that the discussion is somehow not “age-appropriate.” The law deliberately employs broad and vague terms, inviting arbitrary and discriminatory enforcement by parents, who are designated as roving censors and empowered to sue local school boards for damages based on any violation.

“Over time and continuing today, our nation has strived to make good on its promise that everyone is entitled to be treated with equal dignity under the law. That is true when it comes to LGBTQ Americans, who now have the constitutional right to identify openly as LGBTQ, to marry, and to form families with children,” said Roberta Kaplan, founding partner of Kaplan Hecker & Fink LLP. “With the passage of HB 1557, Florida has not only taken a giant step backwards, but it has done so at the expense of our children, the most vulnerable members of society. It is hard to imagine anything more offensive to our constitutional system than treating one group of school kids as second class based solely on who they are or who their parents are. This law cannot be allowed to stand.”

By design, HB 1557 constructs a statutory scheme in which any rational person who discusses or acknowledges any aspect of LGBTQ identity must fear running afoul of the law. The effect of HB 1557 is thus to chill the rights of teachers, students, and school officials, who, like any rational person, will avoid the danger zone created by a state-mandated censorship code.

As a result of its broad and vague terminology, HB 1557 raises—but intentionally fails to answer—a host of questions that will recur in schools throughout Florida. For example, can a student of two gay parents talk about their family or their parents’ marriage during a class debate about civics? Are teachers allowed to respond if students with gay parents discuss their family life in class?  If so, what can they say?  What can a teacher say to a student or a class if a student is being bullied in school because of their sexual orientation or gender identity?  Does a school librarian have to remove every book with LGBTQ characters or references?  If a kindergarten student draws a picture of their family for class, and that picture includes same-sex parents or a transgender sibling, is the teacher prohibited from hanging it on the wall alongside pictures by every other student? If a student writes an essay drawing on their LGBTQ experiences, is the teacher allowed to grade it—and, if so, must they refuse to provide any substantive feedback?

The harmful effects of HB 1557 are already apparent in public schools across Florida. Due to the law’s vague prohibitions and threats of litigation, teachers and school administrators have said they will remove LGBTQ references from the curriculum and no longer foster or participate in discussions that touch upon LGBTQ issues. LGBTQ students and parents are unsure about whether they can express or discuss their identities, and they worry about detention or other discipline or exclusion that may result if they do. The subordination and erasure of LGBTQ life that HB 1557 seeks to achieve has already begun—and has already imposed concrete harms on countless children and families in Florida, including many of the plaintiffs in this case.

“My school has been a safe environment where I have been able to express my identity,” said plaintiff Zander Moricz, an 18-year-old senior at Pine View School. “I would not have been able to learn and thrive without that support. My teachers have already told me that they will no longer be able to have some of the classroom discussions that helped me feel accepted in school.”

“I am frightened that this new law will prevent my daughter’s teachers from protecting her from bullying at school,” said Lindsay McClelland, mother of plaintiff Jane Doe, a transgender fifth-grader at a Florida public school. “All I want is for my daughter to be able to learn in a safe environment like any other student.”

“Already, our children have told us that they are afraid that they will not be able to talk about their family at school,” said Dan and Brent VanTice, parents of two first-grade students.  “We are heartbroken that our children are already feeling isolated and stigmatized by this law.”

“As a Rabbi, I teach that all individuals should be celebrated for who they are, and that we have a moral and religious obligation to protect the most vulnerable in our communities,” said Rabbi Amy Morrison. “This bill flies in the face of those biblical teachings, threatening the well-being and safety of Florida’s children.”

HB 1557 places the Plaintiffs and countless others in danger. LGBTQ students already face disproportionality high risks to their mental and physical health. The law not only stigmatizes and silences those vulnerable students, exacerbating risks to their welfare, but also threatens school officials who foster a safe and inclusive environment for them. Moreover, HB 1557 erases other LGBTQ members of the school community and parents, to the detriment of all.

“We are proud to stand with the families who have fought to be recognized and with the students who have demanded to be included and respected,” said Nadine Smith, Executive Director of Equality Florida. “LGBTQ people are a part of every family, every community, every school, and we will continue to stand firmly on the side of equality for all.”

“1 in 4 children with LGBTQ+ parents already report feeling unsafe in school and this harmful law will make thousands of children and families in Florida potentially even more vulnerable to bullying and mistreatment in the classroom,” said Stacey Stevenson, Chief Executive Officer of Family Equality. “Our families deserve to be treated equally under the law. We are nothing to be ashamed of, and our existence cannot be erased.”

“This discriminatory law threatens the decades of progress we’ve made in creating safer schools for everyone,” said NCLR Executive Director Imani Rupert-Gordon. “While this law will endanger all students, it will be particularly damaging to LGBTQ students and LGBTQ parents. We are filing this challenge only days after the bill was signed into law because the harms it is causing are already so incredibly clear. Every young person deserves to be safe at school and we will fight unconscionable laws like this until that is true for every student.”

A copy of the complaint can be found here.