An Honest Broker with a Big Megaphone 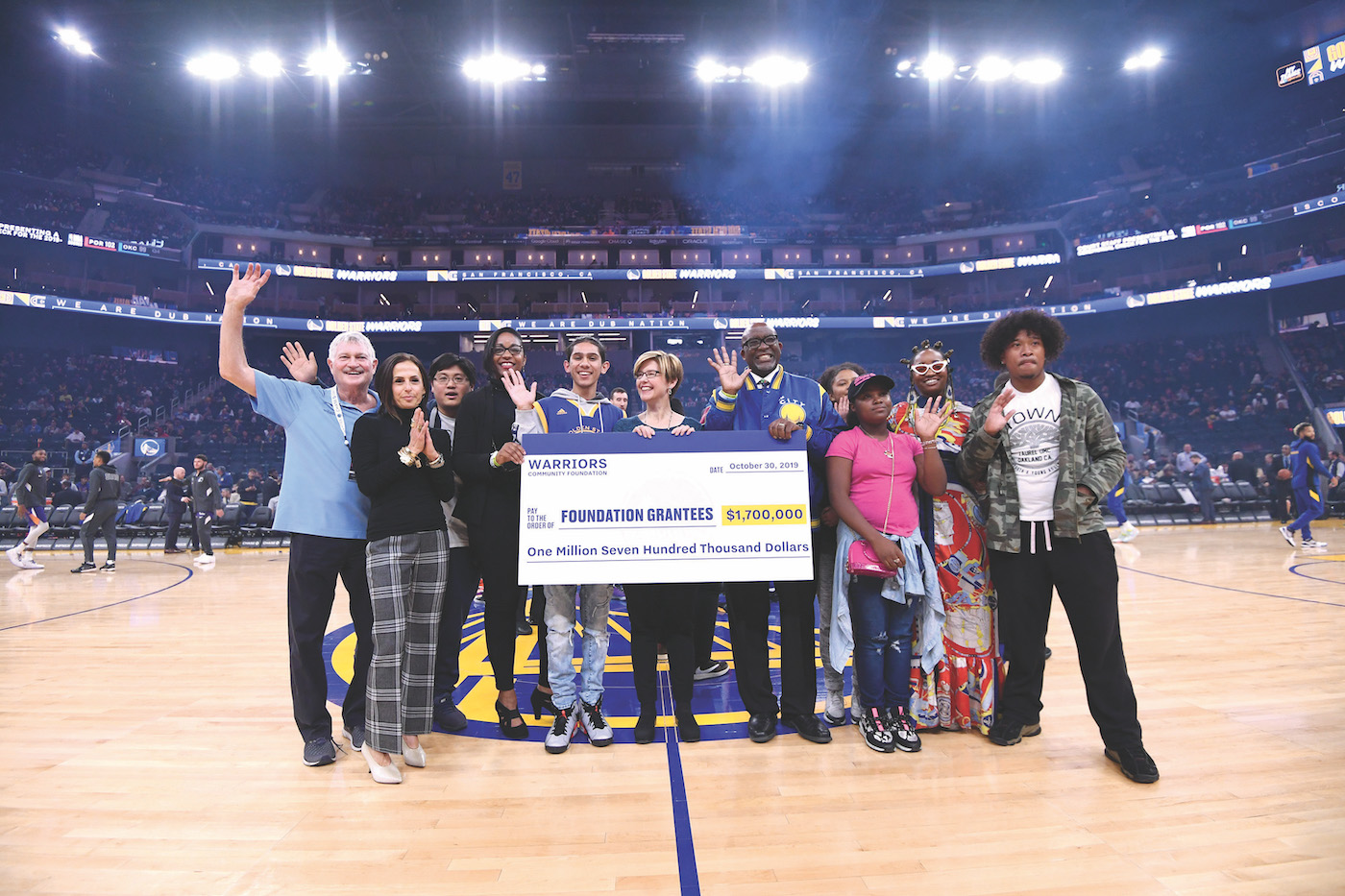 Every year, the Warriors Community Foundation – the philanthropic arm of the six-time NBA Champion Golden State Warriors – hosts a poker tournament fundraiser. It costs $10,000 to buy in, and for those who do, they get to play cards with the entire Warriors team and might have an opportunity to bluff Stephen Curry, call Draymond Green, or fold to Andre Iguodala.

The poker tournament is the Warriors Community Foundation’s biggest fundraiser of the year and typically garners nearly $2 million – the lion’s share of its yearly donations. But due to the pandemic, last year’s poker tournament was called off, leaving the Foundation with a massive hole in the charitable donations it needs to grant out to schools and education-focused nonprofits in San Francisco and Alameda counties.

Pandemic be damned, thought Brandon Schneider, the Warriors’ president and chief operating officer and a Foundation board member; he wasn’t going to let that hiccup sidetrack the Foundation’s ability to make grants. While not steeped in the nonprofit sector like other board members and staff, he knows one essential thing very well: money. Before he took on the chief operating officer role, he was the Golden State Warriors chief revenue officer.

“We’re losing our biggest fundraiser, but we’re going to find a way to be able to grant out just as much money this year as we did last year. And I know that sounds crazy, but there is more of a need now than there is during a ‘normal year,’” he remembers saying to the board.

The Foundation formalized a process allowing the owners of the team to contribute to the Foundation, and “virtually” knocked on doors of possible private donors until they not only met last year’s goal but exceeded it, raising over $1.8 million, Schneider says.

“We were able to fill the hole, which is unbelievable,” he says.

The Foundation has a very specific purpose: education. It’s where the Foundation believes it can make the biggest impact.

Since its founding in 2012, the Warriors Community Foundation has given grants to school districts and nonprofits totaling $24 million in support of education and youth development. The Foundation has given 15,000 coveted tickets to local youth and has refurbished over 85 basketball courts.

The Foundation works with roughly 50 organizations annually, which focus on education in some capacity from childhood literacy to high school afterschool programs, and gives them checks typically in the $10,000 to $50,000 range.

Beyond the needed cash, Scheider says the coolest part is when players and coaches call the nonprofits to let them know they received a grant from the Warriors Community Foundation.

In addition, the Foundation does basketball court refurbishments through its Making Hoops program and partnered with Salesforce where eight organizations get a $500 donation every time a Warriors player hits a three-pointer each season.

In 2019, the Foundation upped its game, partnering with Kaiser Permanente to create a nonprofit hub for education called Generation Thrive. Schneider says it’s a philanthropic accelerator program – whereby fostering collaborative workspaces and providing educational resources for teachers and nonprofits, the aim is to produce innovative ideas, models, and programming for the education field.

For example, Generation Thrive might bring together organizations that support college readiness and provide them with the space and tools to collaborate on what they’re doing and how they’ve been successful, Schneider says.

Education is very important to the Golden State Warriors’ majority owner Joe Lacob, who was the first in his family to graduate college, and his wife, Nicole, who is the Foundation’s board president and spent seven years teaching high school history and government. In 2018, she was inducted into the Alameda County Women’s Hall of Fame for her philanthropic work.

The Foundation, though attached to an incredibly successful franchise, is a rather small operation, Schneider says, especially compared to mega tech companies in the Bay Area like Apple, Google, Facebook, and Salesforce.

But, he adds, “we punch above our weight quite a bit.” Plus, all the money they raise they give out, making the Foundation what he calls an “honest broker.” Philanthropists know when they donate their money it will go to a worthy recipient.

And because the Foundation has the Warriors brand awareness behind it, “We have a huge megaphone,” Schneider says, and its players can use their public profiles to raise awareness for issues and nonprofits the Foundation funds. It’s not only about writing checks. The Foundation partners with the tech giants and other large for-profit companies, like Clorox, which can offer in-kind services or make contributions directly to the Foundation’s organization it supports.

Schneider joined the board in 2018 and did not fully grasp, at first, what a rewarding experience it would turn out to be. There have been many hugs from happy principals and nonprofit executives who gush about the impact the Foundation has had on them and their youth.

One recent memorable moment stands out: the basketball court refurbishment at McClymonds High School in Oakland, Schneider says. The West Oakland school, the original home of the Warriors, has a legacy of producing basketball stars, including NBA Hall of Famer Bill Russell and other greats, like Odis Allison, Antonio Davis, Joe Ellis, Paul Silas, and Nate Williams.

But the basketball court hadn’t been redone in more than 50 years. Teaming up with Rakuten and the Good Tidings Foundation, the Warriors Community Foundation gave the gym an overhaul and a makeover.

“He looks at me and he says, ‘We now have the best gym in California,’ and then,” Schneider recalls, “he goes, ‘Okay, maybe, except for Chase Center.’”

community.warriors.com/foundation
President of the Board: Nicole Lacob

The Warriors Community Foundation is dedicated to making a meaningful and lasting impact on the lives of underserved youth in the San Francisco Bay Area. Specifically, the Foundation strives to improve educational outcomes among children in Alameda and San Francisco Counties.

The Warriors Community Foundation is a central pillar of our franchise’s passion to impact our community. With a dedicated focus on educational equity for youth in the Bay Area, we have a unique platform to work with our partners to change the lives of young people in the Bay Area.